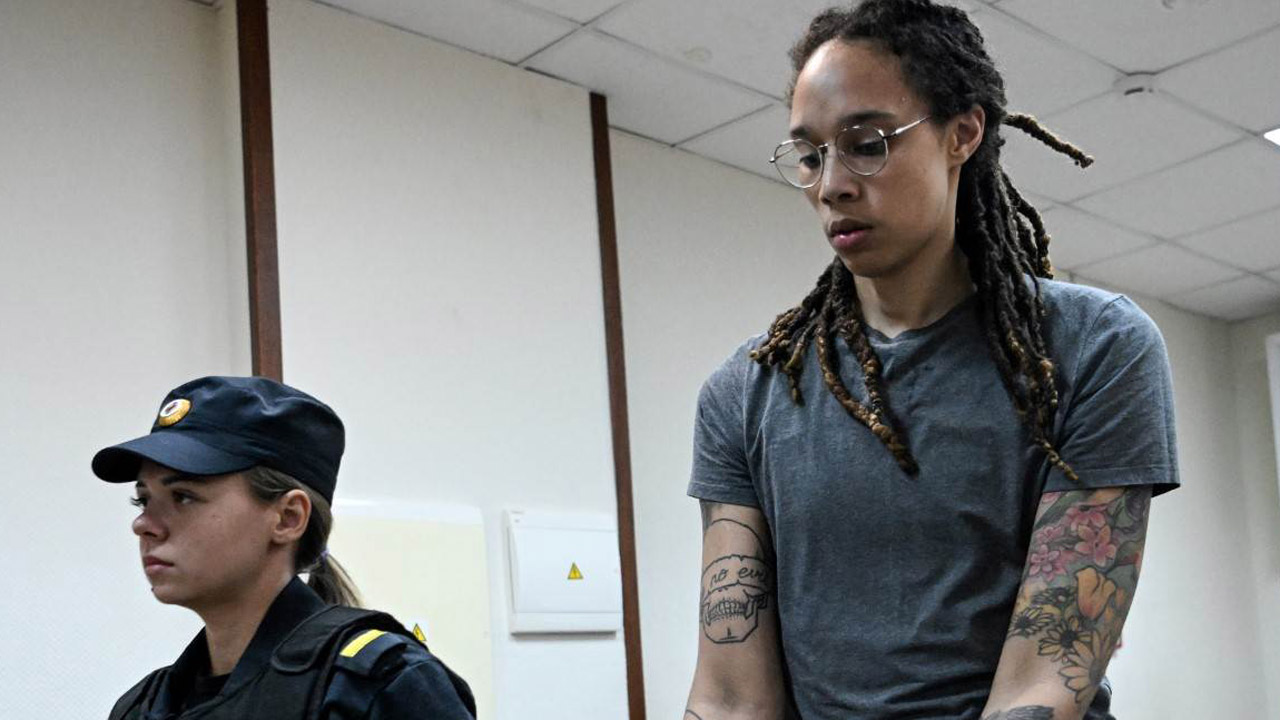 US Women National Basketball Association’s (WNBA) basketball player Brittney Griner, who was detained at Moscow’s Sheremetyevo airport and later charged with illegal possession of cannabis, leaves the courtroom before the court’s final decision in Khimki outside Moscow, on August 4, 2022. – Russian prosecutors requested that US basketball star Brittney Griner be sentenced to nine and a half years in prison on drug smuggling charges. Her hearing comes with tensions soaring between Moscow and Washington over Russia’s military intervention in Ukraine that has sparked international condemnation and a litany of Western sanctions. (Photo by Kirill KUDRYAVTSEV / POOL / AFP)

A Russian court on Thursday sentenced US basketball star Brittney Griner to nine years in prison over drug smuggling as US President Joe Biden called the ruling “unacceptable”.

The court “found the defendant guilty” of smuggling and possessing “a significant amount of narcotics”, judge Anna Sotnikova told a court in the town of Khimki just outside Moscow.

Sotnikova sentenced Griner, one of the world’s greatest basketball players, to nine years in a Russian penal colony and said she would also have to pay a fine of one million rubles ($16,590).

“I love my family,” Griner told journalists after the ruling as the six-foot-nine (2.06 metres) athlete was led away by members of Russia’s law enforcement.

Her defence team told reporters the 31-year-old — known as BG to her friends and fans — was “very upset” and “very stressed”.

“Russia is wrongfully detaining Brittney,” Biden said in the statement.

“It’s unacceptable and I call on Russia to release her immediately so she can be with her wife, loved ones, friends and teammates.”

The US president reiterated that he would “work tirelessly and pursue every possible avenue” to repatriate Griner.

Her trial accelerated in recent days as the United States and Russia discuss a potential prisoner swap that could involve the basketball star.

The athlete was detained at a Moscow airport in February after she was found carrying vape cartridges with cannabis oil in her luggage.

The arrest came just days before Moscow launched its military intervention in Ukraine.

– ‘Honest mistake‘ –
Prosecutors had earlier requested the two-time Olympic basketball gold medallist and Women’s NBA champion be sentenced to nine and a half years in prison on drug smuggling charges.

Griner’s trial came with tensions soaring between Moscow and Washington over Russia’s military intervention in Ukraine that has sparked international condemnation and a litany of Western sanctions.

“I made an honest mistake and I hope that your ruling doesn’t end my life here,” Griner said earlier on Thursday.

“I want the court to understand it was an honest mistake that I made while rushing, under stress, trying to recover from post-Covid and just trying to get back to my team.”

Griner pleaded guilty to the charges, but said she did not intend to break the law or use the banned substance in Russia.

Her defence team said they were “very disappointed” by the verdict and would appeal.

“The court completely ignored all the evidence of the defence, and most importantly, the guilty plea,” lawyers Maria Blagovolina and Alexander Boykov said in a statement.

“The verdict is absolutely unreasonable. We will certainly file an appeal.”

– ‘Bringing BG home‘ –
Boykov told reporters that the ruling was too harsh and many Russians usually get a suspended sentence for such a crime.

“The WNBA and NBA’s commitment to her safe return has not wavered and it is our hope that we are near the end of this process of finally bringing BG home to the United States,” WNBA commissioner Cathy Engelbert and NBA commissioner Adam Silver said in a joint statement.

Prosecutor Nikolay Vlasenko had requested a prison sentence of nine years and six months for Griner, requesting a term just short of the maximum punishment of 10 years.

Vlasenko said Griner “deliberately” proceeded through the green corridor at customs and stated she had nothing to declare “in order to conceal” the substance.

Standing inside a cage for defendants before the start of the hearing, Griner held up a photo of herself with teammates from the Russian club she plays for.

Griner was detained when she came to Russia to play club basketball with UMMC Ekaterinburg during the US off-season — a common path for American stars seeking additional income.

The WNBA star said she had permission from a US doctor to use medicinal cannabis to relieve pain from her many injuries.

US Secretary of State Antony Blinken said last week that Washington had made a “substantial proposal” to Moscow to free Griner and former US Marine Paul Whelan, who was imprisoned on espionage charges.

A prisoner swap was also discussed during a call between Blinken and Russian Foreign Minister Sergei Lavrov on Friday.

The highest-profile Russian prisoner in the United States is Victor Bout, a 55-year-old arms trafficker, dubbed the “Merchant of Death”, who is serving 25 years in jail.

There is no official confirmation that Washington has offered to exchange him.

Russia and the United States have already conducted one prisoner swap since the start of Moscow’s Ukraine offensive.