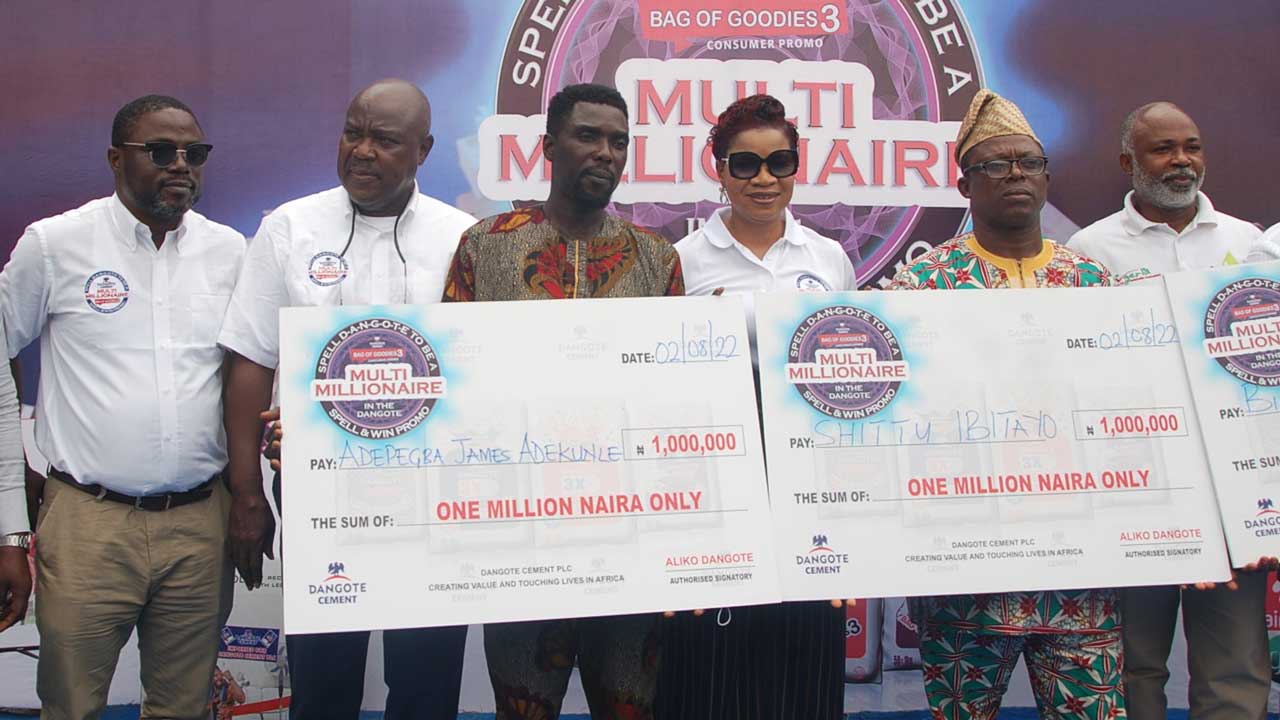 Customers of Dangote Cement Plc are to win over N1 billion in cash prizes in the ‘Dangote Bag of Goodies Season 3’ promo aimed at easing the economic effects of the COVID-19 pandemic.

Tagged ‘Spell Dangote and become a multi-millionaire,’ the campaign, which was launched yesterday, in Lagos, had regulators from the National Lottery Regulatory Commission and Federal Competition and Consumer Protection Commission in attendance.

According to the company, the event, which runs from July 5 to October 31, 2022, promises to be a “blast as there are over 32.3 million prizes to be won, including television sets, refrigerators, rechargeable fans, 2KVA generators and millions of recharge vouchers.”

Group Managing Director, Dangote Cement Plc, Michel Puchercos, said the promo, “is designed to continually reward loyal consumers, who have stayed faithful and remained the backbone in the cement business.”

Head, Lagos Office, Federal Competition, and Consumer Protection Commission, Mrs. Susie Onwuka commended the firm for giving back to consumers through the promo.

No fewer than three lucky Dangote Cement consumers were presented with one-million-naira cheques each even as many others won various prizes including television sets, refrigerators, rechargeable fans, 2KVA generators, and millions of airtime gifts.

The cement manufacturer had weeks ago unveiled a Bag of Goodies National Consumer promo, Season 3 in Lagos during which the company announced that 500 consumers would win a million naira each while another 100 would win N5million within three months.

Amidst praises on the management of the Cement Company, the winners who are block moulders in Ibadan, described their winnings a very surprising as they never believed the promo was real pointing out that crediting of their accounts was timely given the prevailing economic downturn that has impacted negatively on their business.

National Sales Director, Dangote Cement, Mrs. Funmi Sanni explained that the promo was deliberately planned for this period to help the Dangote Cement customers and consumers because of the hard times brought upon businesses by the Covid-19 disruptions.

According to her about N1 billion would be given as prizes by Dangote Cement in form of cash as well as home appliances, saying the promo was indeed a bag of goodies for the Cement customers across the federation.

While congratulating the winners in Ibadan, Mrs. Sanni said the promo was aimed at giving back to consumers who have been the company’s pillar of support and to encourage them for more patronage. “We create value through quality products, exceptional service, competitive pricing and unparalleled consumer value proposition”

This, she noted, was in demonstration of the Company’s vision, which is to provide for the welfare of its stakeholders among which she stated the consumers of the Dangote Cement product were a very strategic and important members.

According to her, “the promo started 5th of July, we say thank you and we will continue to appreciate Nigerians for their patronage and loyalty, we want to urge them to continue to do business with us whenever the need for cement arises.”

The National Sales Director said: “We produce quality products for any types of cement application, we are the leaders in cement industry, we lead the way and others to follow. The Dangote Bag of Goodies” spell and win promo will give an equal chance to everyone, even those at the grassroots level, to become millionaires.”

In his own remark, Dangote Cement Regional Sales Director, Tunde Mabogunje said the Season 3 promo is to further take Dangote Cement customers to another level of prosperity as the promo will produce 125 millionaires monthly as over a N1 billion is up for grabs.

He assured the customers of the Company in the South West that they are in for good deal with Dangote Cement as “we are determined to empower our customers financially in appreciation of their patronage and loyalty to the Dangote Cement brand.”

Also speaking at the ceremony, the West Zonal Director, National Lottery Regulatory Commission (NLRC), Fasunwomi Omotayo said his commission has gone through every details of the promotion and certified it good for the cement consumers and that his presence was to lend credent to the fact that the promotion is genuine.